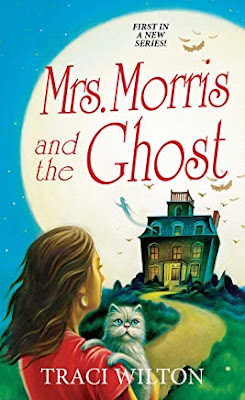 Two of my favorite authors are Patrice Wilton and Traci Hall.

Writing together they are the new author known as Traci Wilton. That's right! To my delight, they have joined together to write a charming amateur sleuth mystery series, the Salem B&B Mysteries, under their joint pen name.

Published by Kensington, the first book of their series is Mrs. Morris and the Ghost.

The mystery can be purchased now in either ebook or paperbook editions on pre-release.

The book publishes July 30 so if you get the ebook, it will be sent to you at midnight on the publishing date. If you prefer paperback, buy on pre-release, and it will be mailed to you when it publishes.

About Mrs. Morris and the Ghost

A grieving young widow, Charlene needed a new start—so she bought a historic mansion, sight unseen, and drove from Chicago to New England to start turning it into a bed-and-breakfast.

On her first night in the house, she awakens to find a handsome man with startling blue eyes in her bedroom. Terror turns to utter disbelief when he politely introduces himself as Jack Strathmore—and explains that he used to live here—when he was alive.

He firmly believes that someone pushed him down the stairs three years ago, and he won’t be able to leave until someone figures out who. 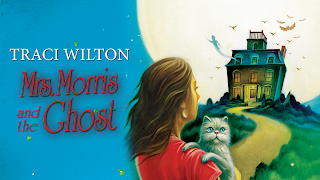 If Charlene wants to get her business up and running in time for the Halloween tourist rush, and get this haunting houseguest out of the way, she’ll have to investigate. Though truth be told, this ghost is starting to grow on her.