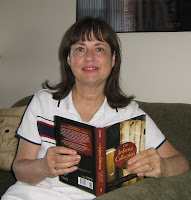 Her novel is offered by the publisher, Five Star/Gale, as well as Amazon.com, Borders Books online, and B&N online. Jacqueline told me that her novel is being offered at an excellent discount from Barnes&Noble online.

Welcome, Jacqueline. Let's break the ice with some. . .

1. What's your favorite TV show and why?

I don’t watch a lot of TV. I usually read in the evening. But I do enjoy Antiques Roadshow. I’ve learned a lot from the program. It gives me a glimpse of other lives, cultures, and history. I enjoy several of the other shows on Public Broadcasting as well. For instance, I like both the Mystery and Masterpiece series.

2. What do you think is the most over-rated TV show and why?

I don’t watch enough TV to answer that question fairly.

The Complete Works of Shakespeare, The Bible, these are books I’ve read and return to many times and discover more meaning with each rereading. On a lighter note, I’ve read and read Jane Austen’s Pride and Prejudice many times as well. It says so much about women’s lives, not just in the early Regency period but for all times.

4. Name a book that you were forced to read in school that you think was a time waste and please tell us why. (In school because that means dead authors and we don't want to hurt feelings. Again, feel free to mention more than 1.)

I disliked The Merchant of Venice which I was forced to read as a freshman in high school. Luckily, we read a good deal more of Shakespeare so that my dislike didn’t stick. But I never considered any of the works I read way back in high school to be a waste of time. Silas Marner by George Elliot was not a favorite of mine as a sophomore. I found it dull. But it was well-written.

Now, let's get down to business.

1. How long have you been writing?

Since I was able to physically write.

I’m beginning to lose count. Let’s see, TEA LEAVES AND TAROT CARDS is my 9th published book. I’ll have a young adult novel STACY’S SONG that will be published later this year by L&LDreamspell, and that will count as number 10. I write fiction for children as well as teens and adults.

3. How long have you been working at your craft? Please tell us something about your journey from the idea that you wanted to write a book to finally writing one for which you received a publishing contract.

I’d love to tell you that it’s been an easy journey, but it hasn’t. I started creating stories when I was in grade school. I was a good student, and my teachers were encouraging. I entered several writing contests that I won back in grade school and high school. I wrote for all the school publications: magazine, newspaper and yearbook. But I didn’t write a novel until I finished college and had worked as an English teacher for several years. That first novel was a literary work that now lies at the bottom of a drawer somewhere. It never quite came together. My first published novel was sold to Crosswinds which was a young adult line put out by Harlequin at that time. When the editor called, I was terribly excited. It was quite a thrill being offered that contract, right up there with getting married and the birth of my first child.

4. Tell us something about this particular book. How did you come up with the title, and do you have a 1 sentence blurb or log line to tease readers?

Actually, my first title for the novel was THE GATES OF PARADISE from William Blake, one of my favorite poets, who I have briefly appear as a character in the novel. TEA LEAVES AND TAROT CARDS just popped into my mind as I rewrote the novel, and I decided I preferred it as a title.

The novel is not a typical Regency. It’s a sensual historical romance set in the Regency period. I believe the hero and heroine are well-developed characters. They are both passionate people. Here’s a blurb from the publisher’s catalog:

This will give you an idea of how the novel starts:

At a ball in Regency London in 1816, Maeve, part gypsy, part mystic and accounted an original by the ton, meets the dashing Marquess of Huntingdon, a fashionable sophisticate and handsome rake. The attraction between them is immediate and powerful. The Marquess dances with Maeve who he finds secretive and mysterious, as well as sexually desirable. He also decides to do whatever it takes to make her his mistress. Maeve, however, doesn't want to be any man's mistress. She values her freedom. What she does want is for Adam, the Marquess of Huntingdon, to help her friend, Lady Caroline, avoid a loveless marriage to Adam's cousin, a man old enough to be the girl's father. The novel is a charming, witty, fast-paced historical romance with elements of mystery, the paranormal and romantic suspense.

I’ve written five more adult novels, mostly romances, that I hope to interest either an agent or publisher in purchasing at some point. I believe they are quality fiction. I’ve also written several more young adult novels that I hope will interest agents and/or editors.

6. If they made a movie of your book, who would be cast to portray the characters?

I can see Angelina Jolie in the part of Maeve. I think she’d be the perfect choice: dark, passionate, mysterious. As for Adam, there are just too many sexy actors to choose from, but I believe someone with a British background and an air of sophistication would be perfect. He’s a difficult character to get because Adam is an aristocrat, well-mannered and polished on the surface but a troubled man beneath with unresolved conflicts.

7. What keeps you going when you get rejected?

Believe me, there have been many times when I thought I’d give up writing for good. I’d say things like I should be scrubbing the floors, how that would be a better investment of my time. But when I do housework, my mind is still on my writing. I write because I can’t not write. I suppose it’s an obsession or an addiction.

8. What's your favorite "oh crap I got a rejection" food and/or drink to soothe the savaged ego?

When it hurts too much, I get away from home, do something that’s fun or different with my husband. We enjoy taking long walks together. As to food, I love ice cream, although I have to settle for low fat or fat free these days.

9. Who are your writing influences?

Honestly, I read everything. I enjoy mystery, romance, but I read literary fiction, horror, science fiction even fantasy. Every writer I read is an influence. I have so many favorite writers that have influenced me. In romance fiction, Jayne Ann Krentz is number one with me because she does it all. Her novels are uniformly excellent. That was why I asked her to read my novel well in advance of publication. I’m honored that she agreed.

At this moment, I’m re-editing a health article that will appear in TEA A Magazine. I also write quite a bit of nonfiction. I enjoy doing research.

11. What do you now know that you wish you'd known when you started?

Not to take life quite so seriously, the bad or the good. I tend to be too uptight, too much of a perfectionist. I demand too much of myself. I’m trying to change that.

12. What's the best thing about writing?

Picking and choosing what projects I decide to undertake, working for myself, being independent.

13. What's the worst thing about writing?

With freelance writing, there’s no steady paycheck as when I worked as a teacher and then as an educational media specialist/school librarian.

14. Do you have writing goals? If so, would you share some with us?

For me it’s very simple. I just intend to write the best possible work I am capable of creating whether novels, short stories, plays, poetry or nonfiction.

15. What advice would you give someone just starting out?

Write if you must, but don’t expect to become rich or famous. Some authors do; however, it’s not that common.

Just that if I had it to do over again, I’d likely not change anything but my attitude toward life. I’d be more positive and worry less. I think having a relaxed outlook greatly helps writers become successful at their craft.

Thank you, Jacqueline, for visiting with us today. Good luck with Tea Leaves and Tarot Cards.

Behind every book is a writer looking for a reader. I hope you'll put this author on your to be discovered list and buy her book today.