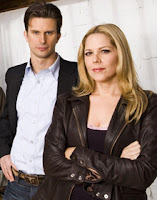 Have you been watching the new season of USA's crime "dramedy" In Plain Sight starring Mary McCormack as U. S. Marshal Mary Shannon and Frederick Weller as U. S. Marshal Marshall Mann. (Poor guy! His conflict is instant, isn't it?) It's on our family's must see list.

These two characters are with the Federal Witness Protection Program (WITSEC) so you can see why this is a crime drama. The comedy is in the characters and their relationships. Last year when we were introduced to Mary, we learned she loves her job, and she's the best at it. We also learned she comes from a family of alcoholics, bank robbers, and losers with a dysfunctional mother and sister in tow.

Marshall, on the other hand, is Mr. Nice Guy. We suspect he's in love with Mary, but she's his partner so it's hands off. She dishes out crap to everyone, and Marshall simply flings it back at her. Very neat and believable relationship. Set in Albuquerque, New Mexico, it's a delight from first word to last.

When the show went into hiatus last year, there was a mass "off with their heads" revolution. The show's creator and writer David Maples and his actress wife Holly who played Eleanore in the series were the first victims.

Then came the news that they were going to cut the very appealing secondary characters who gave the show its depth. I feared the worst. True to that prediction, beginning with the first episode of the new season, Lesley Ann Warren who played Mary's mother Jinx, Nicole Hiltz who played Mary's sister Brandi, Cristian de la Fuente who played her love interest Raphael, and Paul Ben-Victor who played her boss Stan have all left.

Gosh, all those talented people really contributed to the show's appeal. I'm sorry to see them go. However, based on the first few episodes, the show will live on. The essence of the main character and her sidekick remain. Time will tell whether the show will maintain the "viewability" it had under Maples and with the original cast.