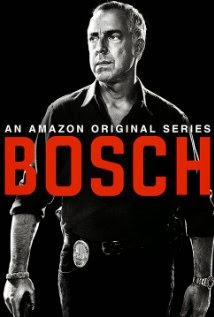 Want a 1 word reason for subscribing to Amazon Prime?

When we got home from a trip, we were so exhausted that all we wanted to do was watch something that would take us away from our worries and concern for a relative who had another cancer surgery last week.

We cruised through the new releases on Amazon Prime and Netflix. The Amazon Original Series Bosch caught our attention. We skipped watching the trailers and went straight to the first episode, or Chapter 1, as it was labeled.

We couldn't stop watching. The series, based on Michael Connelly's Bosch novels, is compelling, gripping, and so well-acted that it's like looking through a peep hole into the squad room of the Hollywood Division, Homicide, of the LAPD.

I suspect that real cops will find this TV series true to life in its depiction of the mundane and the horrific, the rare feeling of satisfaction and the frequent feeling of frustration, and the stomach-turning deal making and necessary battle-picking needed to survive the politics and power jockeying.

Michael Connelly has written one of the most popular mystery series out there. So far, there are 19 books in the series. If you'd like a list of them in order, visit Mystery Sequels Blog. Book 1 is The Black Echo, originally published in 1992. It's available in ebook, paperback, hardcover, and audio book.I think the series Bosch was derived from books 1 and 4.

Titus Welliver, known for Argo, Transformers: Age of Extinction, Gone Baby Gone, and too many TV shows to list, gives a subtle performance that is letter-perfect in every way. He never makes a misstep as the experienced homicide detective who makes the hard choices even though he knows the consequences may be personally devastating. Bosch sees the worst in people, but he doesn't let that deter him from being his best self. His bone-deep sense of integrity informs his every action.

His performance is subtle and layered. He can convey mood better than just about any actor with a look from his intense blue eyes. He's quiet, not bouncing off the walls and screaming like too many television cops.

Mr. Welliver leads a cast composed of veteran actors including Jamie Hector as Jerry Edgar, his partner; Amy Aquino as Lt. Grace Billets, his immediate boss; Lance Reddick as Irvin Irving, the Deputy Police Commander; Annie Weschling as Julia Brasher, a rookie cop with whom he has an affair; Sarah Clarke as his ex-wife, a former FBI profiler; and Jason Gedrick as Raynard Waits, a psycho terrorizing the city.

I was disappointed that some critics said it was too similar to other cop shows. While a story line may be similar--and, indeed, there are so many cop shows made--what separates Bosch from the rest of the pack is the actors' performances. Everything about the series is so well-constructed that each element complements the others. Even the bluesy strains of the song, Can't Let Go by Caught a Ghost, is a part of the exquisite tapestry that is Bosch.