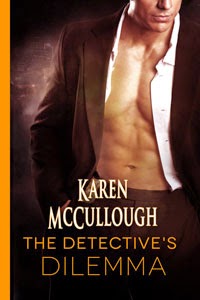 Karen McCullough’s wide-ranging imagination makes her incapable of sticking to one genre for her storytelling. As a result, she’s the author of more than a dozen published novels and novellas, which span the mystery, fantasy, paranormal, and romantic suspense genres. A former computer programmer who made a career change into being an editor with an international trade publishing company for many years, she now runs her own web design business to support her writing habit.

She's won an Eppie Award for fantasy and has been a finalist for other Eppie Awards as well as Prism, Dream Realm, Rising Star, Lories, Scarlett Letter, and Vixen Awards, and an Honorable Mention in the Writers of the Future contest. Her short fiction has appeared in several anthologies and numerous small press publications in the fantasy, science fiction, and romance genres. She lives in Greensboro, NC, with her husband of many years.

Although Sarah Anne Martin admits to pulling the trigger, she swears someone forced her to kill her lover. Homicide detective Jay Christianson is skeptical, but enough ambiguous evidence exists to make her story plausible. If he gives her enough freedom, she’ll either incriminate herself or draw out the real killers. But, having been burned before, Jay doesn’t trust his own protective instincts…and his growing attraction to Sarah only complicates matters.

With desire burning between them, their relationship could ultimately be doomed since Sarah will be arrested for murder if they can’t find the real killer.

1. When did you write The Detective's Dilemma?

I wrote the first draft about eight years ago, but I knew it had some problems so I let it sit on my hard drive for a couple of years. In looking for another story, I found this one and realized I still liked the basic idea and plot very much, so I pulled it out again, rewrote it and submitted it.

2. What was the spark that gave you the story idea?

I can't remember exactly when it popped into my brain, but the vision of a young woman being forced (and I mean literally, physically forced) to shoot her much older lover came to me as a very vivid scenario that I had to write down. The scene was so compelling to me, I had to know the rest of it. Why was this woman alone? Why did someone want her lover dead? When Detective Jay Christianson walked into the story, I knew it was going to get interesting.

3. Why do readers buy The Detective's Dilemma?

A. I can only guess, of course, but reviewers seem to like my hero and heroine quite a bit, and particularly the heroine. She's a woman who has seen a lot of tragedy and had a lot of bad things happen to her. But she refuses to let them defeat or diminish her. When her world falls down around her, she sets about rebuilding it. She rarely slips into self-pity and refuses to let herself wallow in it when she does.