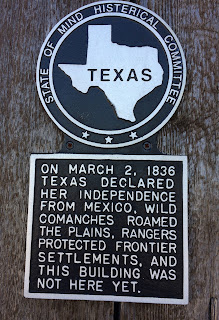 One of our favorite places to grab a good burger is Texas Burger in Madisonville.

Texas Burger is a chain that you'll find only in small towns it seems. They advertise their burgers as being Nolan Ryan's Grass Fed Angus Beef. They're really good.

To the left of the main entrance doors, there is what appears to be a historical plaque.

If you stop to read it and notice the words in the circle around the image of the state, you'll see it's not an actual Texas Historical Marker because those words say: State of Mind Histerical Committee. (Guess that's a mashup of historical and hysterical.)

Read the rest of the sign for a chuckle.

I wonder how many people--like me--actually pause in their quest for food to read this funny marker. I liked it so much I took a photo of it to share with you.

About Texas Historical Markers--The Real Ones

There are more than 16,000 of the real Historical Markers scattered on the highways and byways of the state commemorating the history of the Lone Star State. These markers are manufactured by the Southwell Company in San Antonio. Southwell has been in business since 1866, and they make the real historical markers plus any other plaque an individual or a company might want.

In 1856, the first Texas historical site was to mark graves at the San Jacinto battleground, but the first official State of Texas Historical Monument was Dawson's Men and Mier Prisoners, placed in 1884 at the Fayette County Courthouse to honor the men of the Dawson Massacre and the infamous Black Bean Lottery of the Texas Revolution.