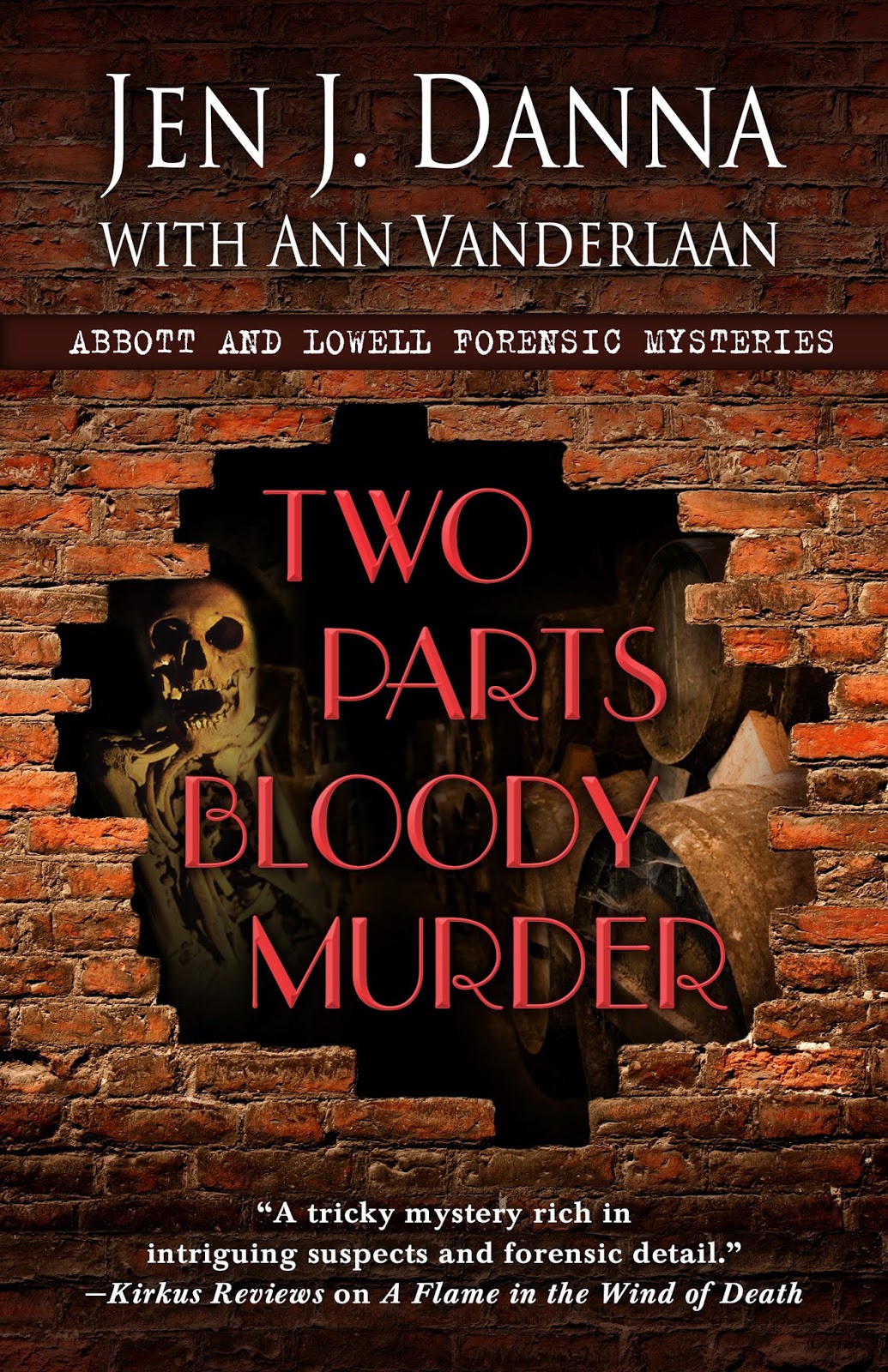 This morning, Jen J. Danna, author and infectious diseases scientist, is my guest. So let's find out more about Jen and her gripping mysteries.

A scientist specializing in infectious diseases, Jen J. Danna works as part of a dynamic research group at a cutting-edge Canadian university. However, her true passion lies in indulging her love of the mysterious through her writing. Together with her partner Ann Vanderlaan she crafts suspenseful crime fiction with a realistic scientific edge.

Their 4 Abbott and Lowell Forensic Mysteries include: Dead, Without a Stone to Tell it; No One Sees Me ’Till I Fall; A Flame in the Wind of Death; and Two Parts Bloody Murder.

Jen lives near Toronto, Ontario with her husband and two daughters, and is a member of the Crime Writers of Canada. You can reach her through the Contact page on her website or by email: jenjdanna at gmail dot com.

1. In which genre do you write and why that particular genre?

The Abbott and Lowell Forensic Mysteries falls, as the name suggests, under forensic crime fiction or, more generally, police procedural. I starting writing in this genre because, as a scientist myself, I found the science fascinating and it drove me crazy when TV shows like CSI took forensic shortcuts in the name of storytelling. I was sure there was a way to tell the story well while staying true to the science involved, so I threw my hat into the ring and gave it a try.

2. What's your most recent book and what's it about?

Two Parts Bloody Murder released just last month, and is the fourth installment of the Abbott and Lowell Forensic Mysteries.

Prohibition was a time of clandestine excess—short skirts, drinking, dancing . . . and death. But a murder committed so many years ago still has the power to reverberate decades later with deadly consequences.

It’s a double surprise for Trooper Leigh Abbott as she investigates a cold case and discovers two murder victims in a historic nineteenth-century building. Together with forensic anthropologist Matt Lowell and medical examiner Dr. Edward Rowe, she uncovers the secrets of a long-forgotten, Prohibition-era speakeasy in the same building. But when the two victims are discovered to be relatives—their deaths separated by over eighty years—the case deepens, and suddenly the speakeasy is revealed as ground zero for a cascade of crimes through the decades.

When a murder committed nearly forty years ago comes under fresh scrutiny, the team realizes that an innocent man was wrongly imprisoned and the real murderer is still at large. Now they must solve three murders spanning over eighty years if they hope to set a wronged man free.

3. As an author, what can readers expect when they read one of your books?

Suspenseful storytelling with real and accurate science backing up the forensics.

4. How did you "become" an author? For instance, was there a moment when you said: "I think I'll write a book."

As a teenager, I used to write for fun with a girlfriend. We’d snail mail each other chapters of our latest works (I’m sure they were terrible, but I’d really love to see some of that material again, just for the sake of nostalgia). That girlfriend is now children’s author R.J. Anderson.

I gave up writing completely sometime during my high school years, then went to University, started my career at the university, got married, had two kids and life was busy for a long time. But years later, when the kids were more independent, I started to dabble again. I met my writing partner Ann Vanderlaan over the internet, we wrote four or five trunk novels together and then decided to try to make a go of professional writing. The first book in the series, Dead, Without a Stone to Tell It, was that novel.

5. What's the best thing about being an author?

Without a doubt, the best aspect of being an author is interacting with readers. After so long with these characters living in your own head, it’s an amazing experience to be able to discuss them as if they were real people with readers who love them as much as you do.

6. What's the worst thing about being an author?

Juggling my time. I still work full time in an infectious disease research laboratory, so I have to shoehorn my writing time into every available minute—before work, on my lunch break, after work and then after dinner. To my husband’s great regret, we have no social life because I simply don’t have time for one. Lucky for me, he’s supportive and understanding about the whole thing.

7. Do you have editions of your books available other than ebook editions?

8. Do you listen to audio books? If so, what device do you use?

Due to time constraints, audiobooks are my main way to consume fiction. I listen when I’m driving, cooking, or doing dishes. I love them! I use an iPod touch for my audiobooks because otherwise I’d be constantly draining my smart phone battery.

9. What device do you use to read ebooks?

I have an older Kindle model and split my reading between that and my phone, depending on where I am at the time and how much time I have to read.

10. If you could give one piece of advice to an aspiring author, what would it be?

11. If you could tell readers one thing, what would it be?

In a world where free and 99¢ eBooks generally devalue the work we do, to remember that authors spend months and years pouring heart and soul into their work. So to ask for fair compensation for their art isn’t unreasonable.

To someday earn enough money by writing to be able to really devote myself to my craft. Right now, it has to take second place to supporting my family, but maybe someday it can be my focus. I live in hope! :)

It’s a double surprise for Trooper Leigh Abbott as she investigates a cold case and discovers two murder victims in a historic building. But when the victims are discovered to be relatives—separated by over eighty years—the case deepens. When a murder committed nearly forty years ago comes under scrutiny, the team realizes that an innocent man was imprisoned and the real murderer is still at large. Now they must solve three murders spanning eighty years if they hope to set a wronged man free.