Day of Tragedy; Day of Service

On a sunny September morning in 2001, I was vacuuming the gameroom when my husband called from his office in Houston and told me to turn on the television.

I did. I could not believe what I was seeing. Black smoke billowed from what looked like the north tower of the World Trade Center.

I told my husband something must have happened to the plane's inflight computer and somehow the  autopilot was locked on.

Of course, that was just my brain trying to make sense of what I was seeing because I could not believe someone had deliberately flown into the building.

As I watched, a United Airlines plane (Flight 175) flew into the South Tower.

Horrified, I stared at the television. For a few minutes I think my brain disconnected. No longer was I trying to find rational explanations of the horror I was seeing. My chest hurt. I realized I was holding my breath. I exhaled and gulped some much needed air. A thought flashed through my mind.

The world has changed.

Nearly every time 9/11 is mentioned in conversation, someone says where they were and asks where you were on 9/11. It was a seminal event in the lives of most Americans. 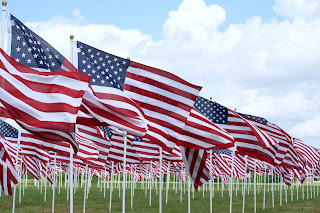 If you weren't born or were too young to remember those early anniversaries, here are some facts for you to know.

The death toll included 265 on the four planes, (No one on the planes survived.), 2,606 in the World Trade Center and in the surrounding area, and 125 at the Pentagon. There were 11 unborn babies who lost their lives.

Of the people trapped in the collapse of the World Trace Centers, only 20 were found alive.

There there are all the service members who were killed or wounded in Operation Enduring Freedom.

Rather than let the 9/11 anniversary fuel your anger, let it inspire you to be of service to others on this day.

There are many ways you can honor those who died or were injured. Here are a few suggestions.

1. Fly your American flag at half-mast in honor of those lost their lives.

2. Give blood in honor of the more than 6,000 who were injured on that day. There are many blood drives on this day. Find one near you.

3. Join a local event to observe the six moments of silence for each key event of the attacks.

4. Talk about with others, especially share it with young people who know it only as part of history.

6. Volunteer through one of the non-profit organizations dedicated to preserving September 11 as a National Day of Service and Remembrance.

7. Donate to a charity that supports the families of 9/11 victims, museums, and other beneficial programs.

For more service suggestions and history of why September 11 was chosen for this attack, read the 2016 article 15 Ways to Remember. The historical significance of September 11 is at the end of the list.

We remember, despite the pain, that fateful day. Philosopher George Santayana famously said, "Those who cannot remember the past are condemned to repeat it."