I spent the day working on Phase 1 of Yard Renovation at our house in the country.

The reno was necessitated by an armadillo in 2013 that completely destroyed the yard that summer by digging  under the house in every shrub and flower bed we had worked so hard to create.

You see, in the country there aren't a lot of landscape crews to do the hard work for you. In fact, it's hard to find anyone who wants to do landscaping work.

The end result? Dead plants, mulch that ended up everywhere but in the beds where it was to keep the weeds from growing, and massive holes all around the house. In the morning, I would fill the holes, only to have darn animal make new ones each night.

The yard never got repaired. By the time the armadillo probably ended up as roadkill, we had started renovating the townhouse in Houston we'd bought and moving. The next year was taken up by reno, moving, and going through treatment for the trapezius muscle I had damaged doing all of the above. 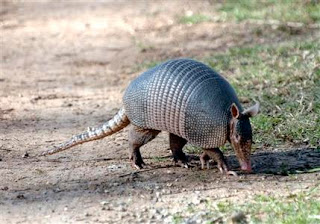 Then in 2015, too many life challenges landed in our lap. We rarely came to our little house in the country. When we did, it was only to mow and go back to Houston.

I thought last year I'd finally have the time to devote to what was an overgrown weed patch--everywhere.

You couldn't even see the landscape rocks that had once edged the shrubbery. But Life had other plans--and another armadillo.

Eventually it must have met its fate on a country road. According to research I did, there's really no way to deter an armadillo. The only thing that makes it go away is death.

I think I can be here every weekend for a few months. So I  decided to work on 1 area each weekend. Make it a blank slate by removing all landscape rock, pull all the weeds, put down new weed block cloth, dump a ton of mulch over that, and place the rock borders back.

I worked all morning on the lantana bed at the corner where the driveway and sidewalk meet. It's a blank slate now.

I finished that shortly after noon. Now I'm waiting for the sun to start going down so I can finish that one area with the weed block, mulch, and rock.

One thing about gardening in Texas in the summer. You must pace yourself and work before noon and after the sun starts going down. The heat is just too great otherwise.