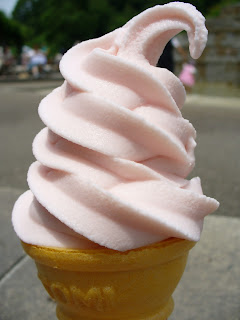 After our Club Royale sandwiches at Jason's Deli today, darling hubby and I were enjoying our soft-serve vanilla ice cream cones. I said, "Wonder who invented the ice cream cone?"

Inquiring Minds Jump on the Internet

Between Professor Google and Ms. Wikipedia, as I fondly call these 2 websites I frequently visit, one can find out anything. Here's the scoop--pardon the pun--on the ice cream cone.

...dry, shaped pastry, usually made of a wafer similar in texture to a waffle, which enables ice cream to be held in the hand and eaten without a bowl or spoon.

Although some waver cones are conical shaped, the ones most of us grow up eating have a flat bottom and are actually called ice cream cups.

The edible cone appeared in French cook books as early as 1825. Julien Archambault told how to roll a cone from a little waffle. In England, a printed reference to the edible cone was made in Mrs A. B. Marshall's Cookery Book, 1888, by Agnes B. Marshall. She called the edible cone a cornet: "cornets were made with almonds and baked in the oven, not pressed between irons."

In 1904 in the United States, Italo Marchioni from New York received a patent for a mold for making pastry cups to hold ice cream. He said he'd been selling ice cream in edible pastry holders since 1896.

Although Marchioni was credited with the invention of the cone, the rest of the story becomes convoluted. Marchioni ended up filing several lawsuits against cone manufacturers for patent infringement, but he lost because, as it turned out, his patent was not for a cone.

Ernest A. Hamwi introduced a similar creation at the 1904 St. Louis World's Fair. Hamwi was selling a crisp, waffle-like pastry called zalabis in a booth next to an ice cream vendor.

Did They All Invent the Cone

Abe Doumar and the Doumar family also claimed credit or could claim it for inventing the edible cone. As the story goes, Abe Doumar, age 16, was selling paperweights and other things. One night, he bought a waffle from a vendor in Norfolk, Virginia, who originally was from Ghent in Belgium.

Doumar rolled up the waffle and placed a scoop of ice cream on top. He sold cones at the St. Louis Exposition also. His cones were a big hit so he designed a four-iron baking machine and commissioned a foundry to produce it for him.

Then at the Jamestown Exposition in 1907, he and his brothers sold almost 23,000 cones. After that, there was no stopping the edible cone.