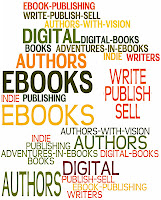 A couple of months ago, Publisher's Weekly published The March of Ebooks about the most recent Bowker Report on the growth of ebooks.

These facts jumped out at me.

In 2010, ebooks held a 2% share of the dollars spent on books which amounted to 4% of units sold. The disparity between dollars and units is due to the lower price of ebooks compared to other print formats.

The increase in ebook sales came at the expense of hardcover sales, according to the Bowker report.

According to reports from mid-June, for the first quarter of the year -- and for the first time ever -- ebooks brought in more revenue for publishers than hardcover books.

Mass market paperback sales continue to lead over ebooks, but everyone is wondering how long that will last.

Another aspect of the Bowker report is the impact of lower priced ebooks on various genres.

The highest percentage of ebook sales is in the mystery/detective genre. In 2010, ebooks accounted for 6% market share. In 2011, that increased to 24%. Unfortunately, the unit gains didn't mean an increase in dollars spent because of the lower price point. That boost for ebooks sales came at the expense of print formats.

Next most popular was espionage/thriller. In 2010, that held 4% of sales. In 2011, that increased to 15%. Nearly every genre showed a similar trend.