I've been waking up very early every morning. Not because I want to, but because I suddenly wake and lay there thinking about too many problems that have no ready solutions.

So I get up, turn on the coffee maker, grab a cup, and go upstairs to the media room.

I cruise around Netflix and Amazon Prime, looking for something interesting to watch because 3am is far too early to start writing.

On Netflix, I came across The Great Raid starring Benjamin Bratt and James Franco, directed by John Dahl, and released in 2005.

(If you're not a Netflix subscriber, you can rent or buy The Great Raid from Amazon.)

Even though I'd never seen the movie before, I knew it was about the famous rescue mission the American forces undertook to save the remaining prisoners of war who had survived the Bataan Death March.

In early 1945, as World War II is nearing its end, Gen. Douglas MacArthur selects Lt. Col. Henry Mucci (Benjamin Bratt) to command a bold rescue mission in the Philippines. There, in the city of Cabanauan, more than 500 American soldiers are being held captive in a brutal prisoner-of-war camp. With the assistance of Capt. Prince (James Franco), Mucci will lead the valiant soldiers of the 6th Ranger Battalion in one of the boldest POW rescues in American history.

The movie was as compelling and tension-filled as any action movie. The actors were believable, and the story was thrilling.

While watching, hoping they managed to rescue the POW's, I found myself forgetting that the story was finished long before I was born.

Why The Movie Resonated With Me

I found the movie especially stirring because I've visited the Philippines and lived in Japan, many years after WWII when the Japanese had become our "friends."

I also remember a long ago day when I lived in Japan and was window shopping along Moromi Street in Koza.

An ancient old woman walked up to me, rattled off several sentences in Japanese then spit on me.

As she ambled away, a gift shop owner I knew came out of her shop, wringing her hands. She'd witnessed the saliva assault. She apologized, saying, "She lost her sons in war."

I was shocked, but not traumatized. I felt sorry for the old woman who carried such hatred inside her.

In Asia, people have long memories...like the old woman demonstrated. By the same token, when I went to South Korea all those years ago, many shop owners in the Itaewon District disdained the Japanese tourists. 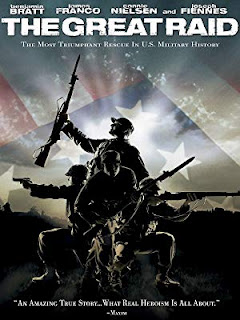 I saw an old man refuse to wait on the Japanese. The salesman waiting on me said, "Japan treat Korea bad in war."

I understood what he meant just as I understood about the old Japanese woman and the desperate attempt to rescue the survivors in the Philippines.

I guess it helps knowing World History which isn't taught to a great extent in American schools any longer.

Watch The Great Raid. It's an amazing action movie, and it's the kind of story everyone should know.