People don't seem to write epitaphs on their tombstones much it seems. Just name, dates, and maybe "Beloved Mother" or something similar.

I have a book of famous last lines and thought I'd share a few with you.

Comedian Rodney Dangerfield got the last laugh. "There goes the neighborhood."

Outlaw Jesse James, famous for his bank robbery sprees including one that led to a $10,000 reward for his capture, was shot in the back of the head on April 3, 1882. Jesse James was unarmed and adjusting a picture hanging on his wall. The killer, Bob Ford, and his brother, Charley, were pardoned for killing Jesse James. However, the public viewed them as cowards as did the outlaw's mother who composed the epitaph on his tombstone. "Murdered by a traitor and coward whose name is not worthy to appear here."

Actress Bette Davis fought her way up in an industry, step by step. Her epitaph? "She did it the hard way." 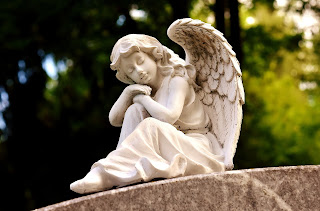 Billy Wilder, a writer, filmmaker, producer, and artist, went with a chuckle, "I'm a writer, but then, nobody's perfect."

Old West gunfighter Robert Clay Allison who killed quite a few men has his philosphy on his tombstone. "He never killed a man that did not need killing."

William Shakespeare has this inscribed on his tomb, "Good friend for Jesus sake forbeare / To dig the dust enclosed here. /
Blessed be the man that spares these stones, /And cursed be he that moves my bones."

Funny: "Here lies an atheist. All dressed up with no place to go." Also, for John Yeast: "Here lies JOHN YEAST. Pardon me for not rising."

Sweet: "I will sleep in peace until you come to me."

Romantic: "I’ll see you on the other side of the stars."