I've been known to  write Romantic Comedy—several of them in fact.

I love humor with romance. In fact, I love a good laugh. So, let's start the week with some chuckles!

I searched through my archive of funny things and found what follows.

I don't know who first uttered these witty words or created these "laws" or when. It seems as if they've floated around the Internet for years. Enjoy!

1. Law of Mechanical Repair
After your hands become coated with grease, your nose will begin to itch. And you'll have to pee.

2. Law of Gravity
Any tool, nut, bolt, screw, etc. when dropped, will roll to the least accessible corner.

The probability of being watched is directly proportional to the stupidity of your act.

4. Law of Variation
If you change lines (or traffic lanes), the one you were in will always move faster than the one you are in now (works every time).

5. Law of Close Encounters
The probability of meeting someone you know increases dramatically when you are with someone you don't want to be seen with.

6. Law of the Result
When you try to prove to someone that a machine won't work, it will.

7. Law of Biomechanics
The severity of the itch is inversely proportional to the reach. 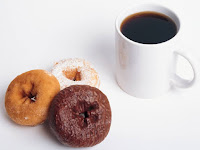 8. Law of Coffee
As soon as you sit down to a cup of hot coffee, your boss will ask you to do something which will last until the coffee is cold.

9. Law of Physical Surfaces
The chances of an open-faced jelly sandwich landing face down on a floor, are directly correlated to the newness and cost of the carpet or rug.

10. Law of Logical Argument
Anything is possible if you don't know what you are talking about.

11. Brown's Law of Physical Appearance
If the clothes fit, they're ugly.

12. Wilson's Law of Commercial Marketing Strategy
As soon as you find a product that you really like, they will stop making it. 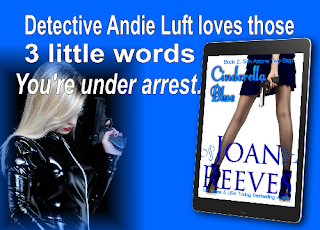 If you like to laugh, try my romantic comedy, Cinderella Blue.

San Antonio Police Detective Andrea Luft—Andie to her friends—loves those 3 little words. "You're under arrest."

Especially when she's saying them to a "bad guy" who SO deserves it. Like the thief stealing designer wedding gowns from San Antonio bridal boutiques.

Andie is undercover and about to make an arrest when Detective Bruce Benton barges onto the scene. The suspect escapes, and, as a reward for this screw-up, Benton and Andie are paired together as partners to close the case. 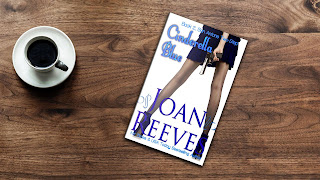 On the surface, this mismatched duo appear to have only one thing in common: their tendency to annoy each other.

Underneath though, desire sizzles. Is it just a matter of time before these two commitment-phobic cops yield to the inevitable?