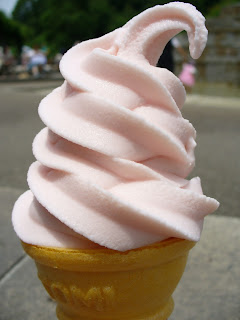 I was watching the documentary Italian Gardens with Monty Don, my favorite English gardener, and was surprised by what was said as he was purchasing a gelato, the popular Italian ice cream.

The woman serving Monty Don said ice cream was invented in Italy. That surprised me enough that I looked up the history of ice cream.

Unless Marco Polo brought it back to Italy along with noodles, ice cream is another food item invented in China.

A frozen ice cream type of food was eaten in China in 618-97AD. In fact, Emperor Tang of Shang, had 94 ice men who helped make a dish of buffalo milk, flour and camphor, freezing the mixture by packing it in snow.

Camphor? That does NOT sound appetizing.

Even though history says the Roman emperors sent slaves to mountain tops to bring back fresh snow which was mixed with honey and nuts, I think the actual blending of milk into a frozen mixture can probably be attributed to Marco Polo (1254-1324) where it's believed he saw ice creams being made during his trip to China.

Ice Cream was a huge hit in every place where it was introduced. Charles I of England supposedly offered his chef £500 a year to keep his ice-cream recipe a secret from the rest of England.

In 1890, a church in the town of Evanston, Illinois succeeded in having ice cream sodas banned on Sunday because it didn't like the crowds drawn to the local soda fountains on the Sabbath Day.

To circumvent that problem, some resourceful merchant replaced the soda with syrup and called the dessert an Ice Cream Sunday, changing the Y in Sunday to an E so they wouldn't upset religious leaders.