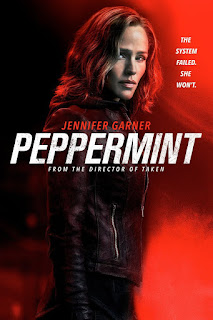 Peppermint is non-stop action, believable characterization, great acting, and spot on with the character's transformation from suburban housewife to vengeance-seeking angel.

I find the scathing reviews of this suspense thriller interesting because I think the reviews would have been vastly different if a man had been the lead actor.

I had already read the online reviews before I watched it yesterday.

As the credits rolled at the end, I said, "If this movie had a man as hero, it would have received raves for its action and no-holds-barred revenge premise.

With a woman as the star, it was panned by most reviewers. I must say I was shocked by the vehemence of some of the reviewers.

As a woman and a mother, I completely understand the character's grief, anger, and desire for justice.

The action was non-stop and Garner held her own. She looked the part with her rippling biceps and was letter perfect with her close quarters combat moves.

Jennifer Garner as Riley North is a woman who can match Keanu Reeves as John Wick with gun fu.

I'd love to see this become a franchise. Come on, Hollywood, get with the program. Women are multi-faceted and are just as heroic as men.

The time has come for a franchise like this. If you don't know how to build a sequel, look at the scene in the convenience store when she takes down a drunken abusive father and pulls his driver's license. Perfect setup.
Posted by Joan Reeves at 12/19/2018 12:30:00 AM