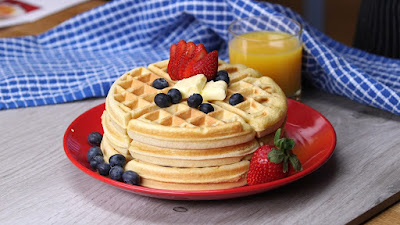 That's right. Today is a special day we can all get behind. It's National Waffle Day.

You can eat them for breakfast, lunch, or dinner with a sprinkle of powdered sugar and fruit or maple syrup.

You can eat them as a dessert with whipped cream and fruit or even ice cream.

So let's give Cornelius Swartwout from Troy, New York, a big thank you. He's the one who patented a waffle iron in 1869.

Throughout history, some form of hot cake has been cooked. Primitive man used hot stones, flipping the cake to cook both sides. When the Iron Age rolled around, an iron plate was used. The lowly hot cake progressed through Ancient Greece and the Middle Ages.

Most of those hot cakes didn't have a leavening ingredient that would have made them "airy" and light. By the 15th century, a hot griddle with that familiar grid pattern was first used. The word waffle was first used in the English language in 1725. Recipes for waffles, many based on earlier European recipes, spread throughout England and America.

Good old American ingenuity came to the forefront in the early 1900's when General Electric introduced their electric waffle iron.

In 1953, the Dorsa brothers introduced frozen waffles. Two years later that product name was changed to Eggo. After the 1964 World's Fair in the Big Apple, the Belgian waffle became popular.

My Love Affair With Waffles

My mom made waffles. Her waffle iron was a G.E. and weighed a ton. Her waffles were crispy and light and so very good.

I've never bought the frozen waffles because I figured they couldn't possibly be as good as homemade ones.

The newer one is a Black & Decker like the one in the picture above. I bought it from Amazon. Like most modern appliances, it's rather lightweight, but it too works well. In fact, when I finished this post, I made waffles with it!

If you don't want to make a waffle today and don't like the frozen kind, then go to Waffle House for breakfast, lunch, or dinner! They make a pretty good waffle too!
Posted by Joan Reeves at 8/24/2018 12:30:00 AM