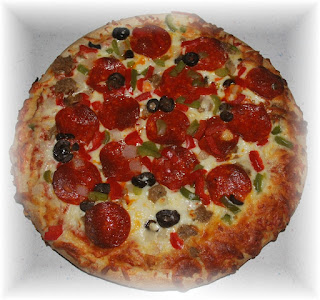 Did you know today was National Pizza Day?

That's what I heard this morning on the news as I was driving across town. That brought back memories of the best pizza I ever ate.

Not surprisingly, my best pizza memories are from Italy.

When darling hubby and I went to Italy, we ate pizza just about every day. That's not what we'd planned to do, but once we'd had an Italian pizza for lunch, we were hooked.

Difference in U.S. and Italian Pizzas

Pizza in Italy is worlds apart from pizza in the U.S. No matter where you are in Italy, you can go into a shop, order a pizza, and in about five minutes, your pizza is served.

The crust is super thin but has a wonderful fresh-baked bread flavor--not the taste of unleavened crackers as so many thin-crust pizzas in this country have. Instead of a sweet marinara sauce on the pizza, there are thinly-sliced fresh tomatoes.

Let me talk about those tomatoes for a moment. They taste amazing. An Italian told me it's because of the volcanic ash in the ground from Vesuvius eruptions over the centuries. I don't know if that's true, but the Italian tomatoes are sweet and flavorful with a depth of flavor that awakens your taste buds.

Instead of being covered by a carpet of shredded mozzarella, the pizzas in Italy are usually garnished with little chunks of pomodoro cheese, a white cheese similar to fresh mozzarella but having a better taste. Pizzas are finished with chopped fresh basil.

One might say, "Where's the beef?" Or "Where's the meat?" Italian pizzas aren't covered with slabs of pepperoni or any of the other meats one is accustomed to at your local Domino's or Pizza Hut. In fact, not much meat is served at meals. 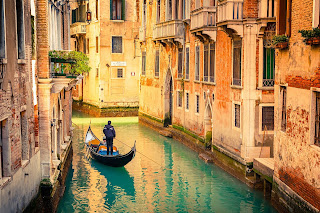 From Rome to the smallest village in Italy, great pizza can be found. One afternoon, on the way to Venice, we stopped at this little hole in the wall cafe in a small town and had one of the best pizzas ever. It was so good, we ordered another after we finished the first one.

Then we rolled on to Venice with full tummies and smiles, ready to see a city I'd wanted to see for as long as I could remember.

Travel not only broadens your horizons but also introduces you to some amazing foods.
Posted by Joan Reeves at 2/09/2017 08:06:00 PM