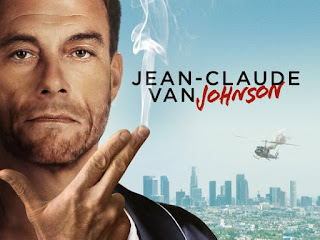 Amazon is trotting out its pilot episodes and giving Prime Subscribers a chance to vote on which they would like to see.

Recently, darling hubby and I watched the 3 up for votes: I Love Dick, The Tick, and Jean-Claude Van Johnson.

I'm reviewing Jean-Claude Van Johnson which was the best of the 3. (The Tick is also eminently viewable and fun.)

I didn't know what to expect going into this. Everyone knows who Jean-Claude Van Damme is but who's this Johnson guy? They're one and the same. Or, I guess you could say Johnson is JCVD's alter ego.

The kicker is that the Jean-Claude in the series is actually a black ops killer known as Jean-Claude Van Johnson.

Trust me on this, the series is hilarious. It's funny, campy, and, best of all, JCVD fearlessly makes fun of himself from his being a "former" action film star who goes unrecognized wherever he goes to his attempt to come out of retirement--as "Johnson" and as an actor.

Of course, it's all because of a woman, his lost love from years past, played by Kat Foster. Can he cut it when he jumps back into the game? Is he still as deadly as he once was?

I wasn't a big fan of JCVD--until I saw this series. The man has unsuspected depths, and this Pilot is superb in every way. I can't wait to see where this goes. Are they going to introduce other aging action stars who also have alter egos as black ops assassins? Who is the mysterious Brown whom JCVD replaced on the assignment--and movie--in Bulgaria?

The movies pitched to JCVD by his agent (played by Phylicia Rashad) are roll-on-the-floor laughable. Think of every classic novel, re-imagined for today's audience.

As an example, the movie being filmed in Bulgaria is a re-imagining of The Adventures of Tom Sawyer and Huckleberry Finn with JCVD as Huck and a buxom blonde as Tom Sawyer. The confrontation between Huck and Pap Fin (Tait Fletcher) is vintage martial arts--and funny.

If you're a Prime Subscriber, check out the pilots and take the surveys to voice your opinion. If you're not a Prime Subscriber, you might want to sign up now. Amazon Prime and Netflix, the other highly popular streaming service, have some of the best original programming. Here's a link for a free trial.