Review: The Fall, a Netflix Original 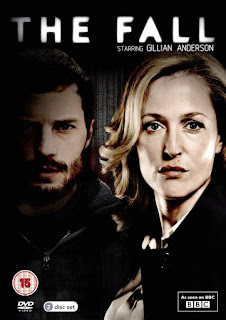 The Netflix Original series, The Fall, is the stuff of a woman's nightmares. If you live alone, you may want to watch this in a group because it's seriously twisted and scary.

Although The Fall is a Netflix Original, it's also available on Amazon in your choice of online streaming, DFD, or Blu-Ray.

The Fall is a psychological thriller that closely details 2 hunters -- one a serial killer working in the Belfast, Norther Ireland, area who preys on victims in and around Belfast, Northern Ireland, and the other a cold and calculating female detective sent to catch him.

Gillian Anderson is superb as DSI Stella Gibson, who seems to have ice water in her veins, heads the task force dedicated to solving the crime spree. Her character is not very likable, but she is very capable.

Jamie Dornan, seen most recently in 50 Shades of Grey, is Paul Spector, a husband and a father and a family counselor who lives a double life. This is no spoiler because the killer's identity is revealed from the start. Dornan is too good in the role as he toys with Gibson and brutalizes his victims. The man is seriously creepy.

Season 1 and 2 are on Netflix. Season 3 started filming in January of this year. I guess there are some lessons about personal safety that can be learned from this series so after watching it, take a look at your own habits that might be risky.