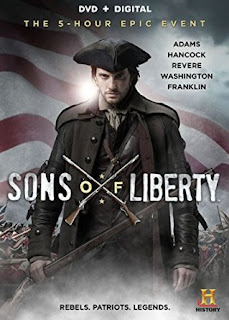 Recently, I watched 2 films about revolutions. The first was Sons of Liberty, and the second was Texas Rising. I found both of them enjoyable and would like to tell you why.

The History Channel seems to be taking a page from the Skinemax playbook with its mini-series Sons of Liberty. I mean, who thought the founding fathers were such hunks?

There's Jason Omara as George Washington, Ben Barnes as Samuel Adams, Ryan Eggold of The Blacklist as Dr. Joseph Warren, and so many more studly actors portraying swashbuckling founding fathers that you'll watch just for the eye candy. For the men in the audience, there are the lusty ladies of the Revolution.

Toss in a hefty dose of sex and near-nudity and you have a Revolutionary war era for the new generation. That's not to say this film is not highly entertaining. It is. Plus, it whets one's appetite to do a little digging and find out the truth in the story presented by Sons of Liberty. 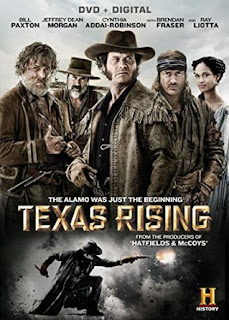 The History Channel took much literary license in producing its controversial mini-series. It makes one wonder why they didn't simply tell the dramatic, suspenseful true story.

You may want to pass on Texas Rising if you're a native Texan like my husband. He, like many native Texans who reviewed this film, scoffed at it and its portrayal of the Texas Rangers, Sam Houston, and all the historical events near and dear to a Texan's heart.

If you're not a Texan, then you may find this mish-mash of history fact and fiction entertaining. Bill Paxton, Jeffrey Dean Morgan, Thomas Jane, and Brendan Fraser--just to name a few of my favorites--are superb. It's the story that is sadly lacking in substance and truth that hurts the entire effort. We found the documentary promoting Texas Rising much more effective than the mini-series.

So if you can suspend disbelief and ignore the fact that none of the geographic settings resemble anything like the terrain around San Antonio or any other part of the region that featured prominently in the Texas Revolution and also ignore that the Texas Rangers are portrayed as so much less than they were in real life, then you might be entertained.

Even when films about historical events are flawed, they can be good entertainment and, hopefully, inspire viewers to learn more about the true life events they purport to portray.
Posted by Joan Reeves at 8/03/2015 08:39:00 PM