Why Stories Begin With Change 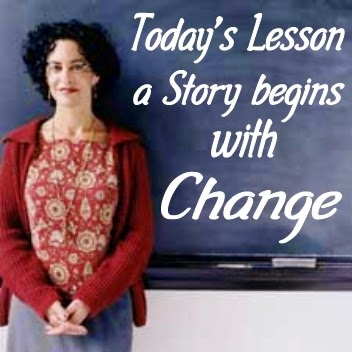 In the beginning, you may be troubled but surviving okay. Then, someone or some thing threatens you, and the status quo is over.

Change has an ongoing downstream effect on a person.

You have a great job one day; you're successful and well paid. The next day, you're fired. This change is perceived as negative. It may change everything including the way you look at yourself.

Let the change of unemployment exist for a while, and your self-concept may start to change. The change—being unemployed—can force you to confront your true self because maybe you never believed in your success.

What happens when you face the truth? Maybe you felt as if you were a poser—fooling everyone. Change will force you to either admit you were a fake, and you become the loser you really felt you were. Or you change and become the person everyone else already thought you were. Or maybe you were a success but you hadn't realized that success requires ongoing hard work and commitment you never really put into your career. So you change in that direction.

Change can have unexpected and surprising effects on a person—on a character. Sometimes the result is good; sometimes it's bad. It's never indifferent.

It seems inherently human to resist change. Psychologists say that change of any kind is threatening to the self-concept, and the self-concept is what you will cling to, fight for, and resist changing, regardless of whether the change is anticipated to be good or bad. That's why so many therapists now use cognitive therapy—bringing the conscious mind into the battle to change one's thinking.

Whether you're talking real people or characters, change means we are no longer in harmony with ourselves and the world around us. Change means we must change. Sometimes the change is external, but external changes will create internal changes. All the while, we will subconsciously struggle to maintain the status quo because of the built-in need to protect the self-concept.

Analyze Yourself to Inform Characterization

The self-concept or self-identity wants to maintain itself as it is. This is why changing a habit is so hard. Have you ever tried to change a habit? Was it easy? Probably not. If you succeeded, how did you do it? What kind of external changes have occurred in your life? Did they cause internal changes in how you thought or how you viewed someone or a situation? How did you feel about that?

Do you see how your own struggle, your own feelings, can be mined to create characters that grip the imagination?

Jumping into a scene where change occurs is the literary narrative technique know as in media res, Latin for into the middle of things. This is how successful authors hook readers. Start where your character is involved in crucial action that's going to change the character's situation.
Posted by Joan Reeves at 1/26/2015 07:43:00 PM