Beyond I-Hate-My-Book by Kristy Tate 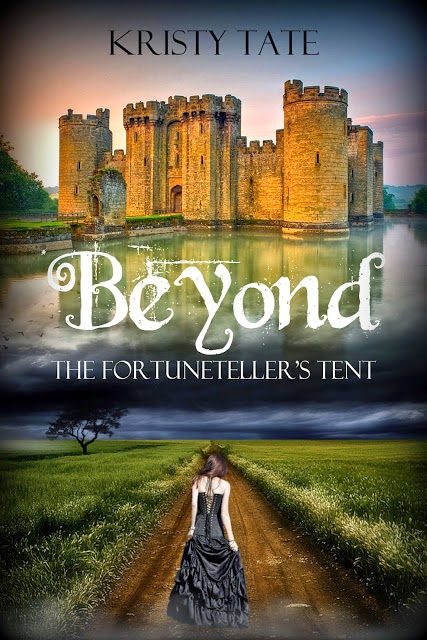 This morning I have Kristy Tate, one of my Authors of Main Street friends, as my guest.

which is now on sale for only 99cents.

Who Is Kristy Tate?

, was on Amazon's Top 100 Historical Romance list for more than 15 weeks and spent 2 weeks as number 1. Her novel, The Rhyme's Library

Kristy studied English literature at Brigham Young University and at BYU's International Center in London. Although a long time resident of Orange County, California, where she lives with her family, Kristy's heart belongs in her hometown of Arlington, Washington, aka Rose Arbor, the fictional setting of her popular Rose Arbor Series.

About Beyond the Fortuneteller's Tent

When Petra Baron goes into the fortuneteller’s tent at a Renaissance fair, she expects to leave with a date to prom. Instead, she walks out into Elizabethan England, where she meets gypsies, a demon dog and a kindred spirit in Emory Ravenswood. As Petra slowly falls for Emory, she wonders if he really is who he seems, or if he is just as lost as she is. How can they have a future while trapped in the past? Or is anything possible Beyond the Fortuneteller’s Tent?

Getting Beyond I-Hate-My-Book
by Kristy Tate

On Friday, I decided that I hated my book. Totally unrealistic and pointless. Who time travels? No one. I don’t personally know anyone who’s ever time traveled even a few minutes, let alone 400 years.

So, in an effort to make valuable use of my time, I decided to sew pillows. (My mother, a gifted seamstress would have been so proud.) I went to the fabric store, found fabric, cut fabric, paid for fabric, came home and put fabric on my daughter Natalie’s bed, pleased with how it coordinated with the walls, bedspread and lampshades.

Natalie came home from school and discovered the pillows in embryo. “What’s this?”

Me. “Isn’t it darling? I’m making pillows for your bed.”

Natalie. “No thank you.”

“I don’t want fancy pillows on my bed.”

A pointless argument ensued and ended with, “I’ll just put them on your bed after you leave for school.”

Followed by, “I’ll just take them off and hide them.”

All this finding, cutting, paying and arguing was not a valuable use of my time. My mother would not be proud. I decided I should stick with characters of my own imagination who would welcome fancy pillows with tears of gratitude. (Anyone want some fabric?)

Three and half years later. It’s interesting that soon after this, I put Beyond the Fortuneteller’s Tent away and didn’t look at it, or think about it for at least two years. It was Natalie, (fancy-pillowless Natalie) who came across the manuscript, read it, loved it, and begged me to write the sequel.

I published Beyond the Fortune Teller’s Tent three years later in December of 2013. A lot has happened since then. I walked away from a life-long dream. As Borders and other large book stores closed around me, I decided to self-publish my books. You can read about that decision here, here and here.

As time passes, I've become more and more grateful for the path that led me away from traditional publishing and helps me live a life I love, filled with an enormous amount of people that I love, and a creative pursuit that keeps me entertained almost every day.

And a benefit, one that I never anticipated or foresaw, I get to meet and become friends with a wide circle of talented writers (like Joan). I’m constantly amazed by the generosity and goodness of the indie community. I’m so happy to be here! Thanks, Joan, for letting me drop by.

If you would like to win an e-copy of Beyond the Fortuneteller’s Tent, leave a comment telling us where you would be if you could go anywhere and to any time.

Buy Beyond the Fortuneteller's Tent

In case you don't win a copy of Kristy's book, here's where you can buy it for a very low price.

After you've read Beyond the Fortune Teller's Tent, be sure and grab the Weddings on Main Street