Video: How To Handle Negative Comments 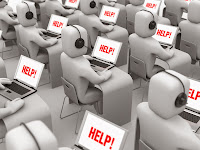 If you upload any kind of content to the internet, you will get negative feedback. It's a given. Whether it's negative comments to a blog post, a video you uploaded to YouTube, an app you are selling, or a book you published, get ready for the onslaught.

Sure, you'll probably get good comments or reviews, but you'll get bad too. In fact, it seems that the more successful you become, the worse the negative comments can be.

Vi Hart, also known as Victoria Hart, is "a self-described Recreational Mathemusician who is most known for her mathematical videos on YouTube."

Taking On Dissenters, Naysayers, and Trolls

Several months ago, Vi took on the negative universe in Vi Hart's Guide to Comments. Embed this video or the link somewhere so you can access it the next time you're feeling miserable about a bad review, negative comment, or blatant personal insult.

In large part, how one responds to online negativity depends on feelings of self-worth. Most people who are felled emotionally by bad reviews and comments have to work harder than others to shake it off. Often a boost helps restore equilibrium. Think of this video as that boost.