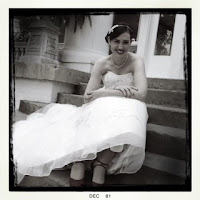 On Thursday afternoon, April 12, about 3:00, my daughter, the newlywed, was driving her blue Mustang convertible on I-10, eastbound. A white Ford Pickup whipped over behind her and tried to pass her--at least that's what we suspect happened. The Ford pickup was traveling at a high rate of speed.

The driver struck her car on the right rear between the bumper and the right rear wheel then slammed into the side of her car sending her spinning in circles across 5 lanes of traffic. Her car landed in the HOV lane between Antoine and Silber exits.

The driver of the Ford pickup sped away. No effort was made to stop and render aid.

If you witnessed this accident, please call the Harris County Sheriff's Department at 713-221-6000 and report what you witnessed.

God must have been watching out for my daughter because no other vehicle struck her car as it was spinning out of control across the width of that freeway. She landed in the HOV lane, facing the wrong direction.

She managed to call me and then 911. By the time I got there, the ambulance and police had arrived and taken charge of the scene.

My daughter survived without major injury, but the driver of the Ford pickup did not know that. The callous disregard for someone whose life may have depended on a prompt call to 911 for an ambulance is chilling.

Not the driver of the vehicle that hit her and not any of the hundreds of vehicles that passed.

Texas drivers, I'm ashamed of you.