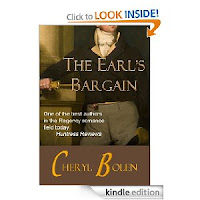 You've probably seen her books on Kindle and Nook. They're the ones whose covers look like elegant classical paintings from the Regency era, like the one shown here.

Recently, Cheryl had a heart-stopping experience with indie publishing. I invited her to share her story so that everyone could learn a lesson the easy way rather than the way she learned it. Here she is to tell you her story.

was published as an ebook at Amazon, Barnes & Noble and other ereader outlets. It was the 8th ebook I'd published, most of them having been previously published in paperback.

Because I already had 7 Regency historical ebooks out – five of them priced at 99 cents – the books had slowly built up a nice readership. I like to think that once Regency readers read one of my books, they want to buy all of them.

My Regencies flourished in September. Within two weeks The Earl's Bargain (99 cents) had rocketed to Number 1 in both Historical Romance ebooks and Regency Romance ebooks on Amazon, and for much of the month I had four in the Top 10 and seven in the Top 40.

I was enjoying every second, but I was also very busy writing my recently contracted print book. I did, however, read what readers wrote about my books. I was terribly disappointed that some readers pointed out The Earl's Bargain had some mistakes in it.

I discovered this, reading in bed at midnight, and my husband was soundly sleeping beside me. I almost woke him, I was so upset. But since he had to get up and go to work in the morning, I didn't.

First thing the next morning, I checked the Amazon website, where it says, "Look inside the Book." I looked inside The Earl's Bargain and discovered it DID have the bad Chapter 2. Then I went back to my Kindle and scrolled to almost the end of the book and checked to see if a scene I had added during my most recent edit of the book was there. My stomach dropped. It was NOT.

Long story short. . .my techie person had not uploaded the edited version of the novel but a very, very old rough draft.

A little bit here about the evolution of this book. About 10 years ago while I was waiting to see if Kensington was going to make an offer for my Brides of Bath series (I knew it was under consideration), I started to write a traditional Regency, The Earl's Bargain. I sent off the first three chapters to Signet Regency, my target publisher. I got a short revision letter from an editor, telling me if I'd change this, this, and this, she'd like to see it again.

While I was waiting to hear back on the revised proposal, I started racing through a rough draft in case they wanted to buy it. I finished the first draft but never edited it because by then I'd sold the Brides of Bath series to Kensington. In the meantime, the editor at Signet who'd asked for the revisions had left, and shortly thereafter, the line closed.

For nearly ten years I did not look at the manuscript.

When I realized ebook readers were hungry for traditional regencies, I decided to polish up The Earl's Bargain. Since the book uses a quest in which the hero and heroine have to travel through Cornwall, I decided the villain – the mysterious Lord from Cornwall – must have a proper-sounding Cornish name. In my first (very rough) draft, I'd slapped the name Smithton on him. In the edited version, his name became Tremaine.

Somehow, the polished Prologue and Chapter One got attached to the rough draft, and that document is what was published and sold something like 8,000 ebooks in three weeks. (Surprisingly, at Barnes & Noble, its review ranking was 4 Stars!)

Not one reader who read the first upload commented on the villan's name changing between the Prologue and when he finally appears at the end of the book.

I cannot tell you how sick I felt when I realized this horrendous mistake. To this day, I do not know how it happened. I've worked all these years to put out a good, professional product, then I really goofed up.

We quickly uploaded the correct document. Amazon will allow readers to reload the corrected version for free, if they purchased the earlier one.

I have learned a very painful lesson. We have an obligation to the reader to offer the very best product we possibly can. In the future, I will have an editor look over my Final document before it's published. Fortunately, I happen to know a very good one now at Ebook Editor Pro. You see my son who has a journalism degree and who edits others decided to hang out his shingle as a freelance editor. If only he'd done this sooner, I could have avoided this nightmare!

I'll also make it standard practice to immediately read the published ebook as soon as it's available.