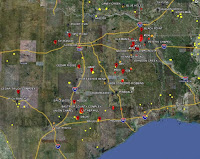 Although the danger is still there, the fire that has threatened us in the Hill Country since Sunday is now out. Emergency Management announced late last night that the fire was 100% contained. Now they're just on guard for hot spots rekindling.

Everything is so dry that the danger still exists. The thousands of dead trees in the forests pose a constant threat of similar incidents. A falling dead tree that hit a power pole, creating sparks, caused the fire that burned more than 5,000 acres, several homes, and a church.

Wildfire Today has the map you see on the blog and a lot of information about the fires in Texas.

This morning the air is crisp and holds only a faint smell of smoke.

Thank you to the firefighters, the brush crews, and all the volunteers who supplied food, water, iced cloths, eye drops, Chapstick, and other supplies to support those on the front lines.
Posted by Joan Reeves at 9/07/2011 08:53:00 AM