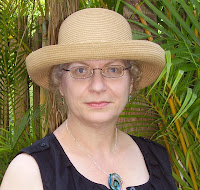 is a warm, loving romance with plenty of heat--the perfect summer read. Elaine Raco Chase, pictured at left, is an author with a witty touch and an ear for dialogue.

This book is also available on all the popular digital publishing platforms.

"Lady, I want you to stop seducing my son! Hell, what are you, thirty-two, thirty-four, Rob is seventeen..there's room for a whole other person! If you don't stop I'll have you arrested for moral turpitude!"

Thus in one of Nashville's poshest restaurants began a stream of threats against Stephanie Brandt along with a heavy hand 'mangling' her shoulder, followed by a bill shoved into the middle of her quiche by a big man wearing work boots, denim and a T-shirt with an obscene foreign word printed on it.

Until Quintin Ward stormed into her life with his threats and accusations, Stevie had not known his son Rob even existed, let alone was her mail room clerk. She definitely was not interested in a seventeen-year-old kid, but as Quintin stalked out of the restaurant she remembered thinking: "Now there's a man whose ass could sell a million pairs of jeans!"

Stevie Brandt is the typical Elaine Raco Chase heroine: smart, savvy, good-natured, and a consummate businesswoman. In other words, she's like most of us modern women. Let's not forget she's attractive, well-dressed, and has perfectly manicured nails--unlike most of us modern women. If only we had it all together like Stevie. But wait. Stevie, like any good romance novel heroine, isn't perfect. There's one thing she doesn't have, and that's a man in her life.

When she finally meets a man who's appealing, he's accusing her of seducing his teenage son! That's the kind of trouble no woman wants, and Stevie is no exception. When she tries to correct the son's misinterpretation of her kindness, she just lands herself in more hot water. In the end, the irate father and she end up plotting together to show the son how boring older women can be.

What follows could easily be the plot of a Hollywood romantic comedy. With dialogue that zings, this sensual contemporary romance rates high on the heat meter. Throw in an absolutely adorable teenage son, and you've got the makings of a book that screams for a sequel to tell the son's story--after he's grown of course.