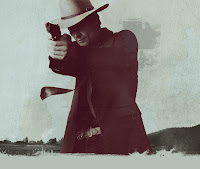 Old-school U.S. Marshal Raylan Givens is reassigned from Miami to his childhood home in the poor, rural coal-mining towns in Eastern Kentucky.

FX’s contemporary western, Justified, concluded its current season Wednesday night. All I can say is that everyone associated with this production is a class act. They all deserve Emmy's, Golden Globes, and any other acting award, writing award, etc.

Writers can learn a lot about viewpoint and characterization from the character of Raylan Givens.


In the Thick of Things


Viewpoint characters are telling the story. They're always at the center of the action. Watch Justified. If other characters have done something, you'll see that Marshal Givens doesn't react to the event so much as he acts. His reaction is to take action. He sets events in motion. He doesn't sit around internalizing and stewing emotionally. He takes action immediately to avert disaster or change the expected outcome.

Your viewpoint character, the protagonist, always has everything at risk. That's Raylan's job description. He puts his life on the line every day and risks everything including his chance to have a happy normal life, all in the name of doing the right thing. It doesn't matter what he personally wants or what he may personally lose. He honors his commitment as a marshal and his own internal sense of right and wrong. Belatedly, he has realized that to gain the woman he loves, he just might have to change. And change is just as difficult for a fictional character as it is for a real person.

Your protagonist or hero is struggling to achieve a worthy goal against great odds which is the conflict driving the story. Raylan faces great odds in his quest to arrest felons, deal with white supremacists, bank robbers, crazy redneck relatives, and more. You think your family is dysfunctional? You ought to meet Raylan's.

All this creates enormous conflict - external and internal - for our hero. Yet, somehow, he always comes out on top through strength of will, persistence, or must plain orneriness. Maybe not in the way you thought, but that's what good characters should do: surprise you. Raylan never stops. He never quits. He keeps going despite anything and everything. He is the epitome of goal-focused action.

Your viewpoint character changes from the beginning of the story to the end. He or she is altered and thus able to live in the changed world - changed because of the story events.

Don't think that Raylan Givens - because he is a TV series hero - is unchanged by all he has faced. This has been on 2 seasons. He's not only changed from the first season to the second, but he's changed in subtle ways from episode to episode, like a book character changes from chapter to chapter.

If you buy the series on DVD and watch the whole season in one setting, the change is dramatic from beginning to end. You see his acceptance of living where he's been planted, and the gradual adaptation of the looser moral code that exists in Harlan County, Kentucky.You also see that he doesn't necessarily like what he's becoming or the image his boss now holds of him.

In being a character willing to do whatever it takes to put down the bad guys, Raylan has lost the ability to be just one of the guys. In a room full of people, he stands out the way a tiger would in a room full of kittens.

Yet, like all good complex characters, being normal, loving and being loved in return is what he wants. Trouble is he wants all that from a woman who couldn't give it to him the first time around. Yet he can't give up that particular dream. So history appears to be repeating itself. That's another internal conflict. What he most wants is what he can't have because he'd have to give up who he is to attain it.

Whether you're creating a hero or just a character, observe real people and the larger than life characters in successful TV and movies. They can teach you a lot.
Posted by Joan Reeves at 5/06/2011 04:20:00 AM