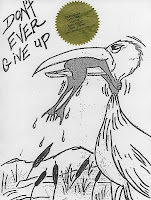 You see this little poster on the left? That's graced the wall next to my desk for years. In case you can't tell, that's a pelican swallowing a frog, but the frog has a chokehold on the pelican's neck because he hasn't accepted death by pelican. He's fighting for everything he's worth. He just won't give up.

I've been judging a lot of writing contests the last six months. Over the years, I've listened to writers who enter contests talk about the feedback they get from judges. I don't know why, but it seems unpublished writers are the harshest judges out there.

The contests I judge have entries that range from the very professional, near perfect, to the poorly written, very imperfect. Most of the romance writing contests I judge have extremely skilled writers who have learned their craft, and they're on their way to a contract. Another group, whose contest I judge every year is, I suspect, composed mostly of retired people who have time to indulge their passion for writing.

Regardless of what the manuscript is like, I make it a policy to find something good to praise. You see, I'm not the kind of person who's going to stomp on someone else's dream.
Maybe it's because I am a professional writer, and I know how hard it is to carve out a career in this subjective arena.

Not The Easiest Career

I know how hard it is to breathe life into a dream and keep doing that until the dream comes true. For some, the dream never comes true. They don't need me to tell them that they don't have a chance. They'll figure that out on their own. I give them the respect due someone who has had the guts to send their words out into the great unknown.

They do it even though they're scared. Of what? That they're no good. That they haven't got a snowball's chance in a really hot place of succeeding. Yet, as scared as they are, something makes them want to know if there's any chance that what they've written is even a tiny bit good. I respect that. I always write: "Keep writing, and you'll get better."

The Lesson To Learn

The real lesson a writer of any age should take away from a contest is that as one writes and grows, the desire to write and publish gives the persistence to hang in there and grow a thicker skin so that rejection and negative comments bounce off like a rubber ball against a brick wall.

That's learned if you keep writing. You keep writing only if you carry the dream in your heart. You carry that dream only if someone doesn't convince you that it (you, your writing), is hopeless.

I don't discourage because I know how easy it is to stomp a dream flat and break someone's heart.

I don't tell someone the literary equivalent of you're ugly and your mother dresses you funny.

I don't make my day by tearing other people or their writing down.

I don't send an entry back without offering specific suggestions like books to read and study or tips on writing something they seemed not to grasp.