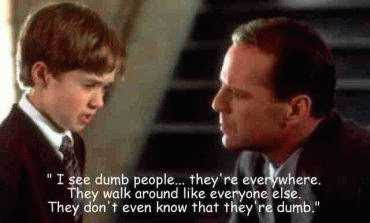 I know I'm going to catch flak for this one! However, I've been dealing with plenty of people who fit this description.

In my attempt to close out my late mother's accounts, I called everyone as soon as I was up to the onerous task. Of course, I took notes of the conversations so I would follow their close-out procedures properly.

I was conscientious. Unfortunately, most of the businesses were either uninformed or they just didn't follow through on what they said they would do.

A well-known organization that allegedly fights for the retired (you know their initials) told me one thing when I first informed them. Then when I called back because they kept attempting to debit my mother's account for a premium, they wouldn't even talk to me because I wasn't on the account nor had I filled out a form to notify them of her death so they could release information to me. WHY DIDN'T THE PERSON I SPOKE WITH A MONTH AGO TELL ME I HAD TO FILL OUT A FORM?

A satellite TV company gave me a phone number to which I was supposed to fax the death certificate. The phone number was a voice number, not fax. Of course, it took a day of fax redialing before I actually got something other than a busy signal. Another hour of calling that same number, and I got a RLP on the phone who gave me different instructions.

The funeral home we used filled out the death certificate incorrectly so it had to be redone and refiled with the state. Just the list of mistakes the funeral home made could fill a blog, and it may before this is all over.

The electric coop power company was supposed to send a check for refund of her membership fee, etc. Instead, they issued a credit to the account which is closed so it's in limbo.

If I keep going, I'll be at the screaming point again since I've been dealing with 10 times this many snafus in the last two weeks. For now, I'm going to pack my bag and make another trip to Louisiana to meet with my lawyer. I'll see y'all next week.