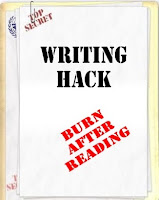 Writing Hack: short cut method to perform a writing technique. Yep, I made up that term myself since I liked the term Lifehack which means an easy, short way to do accomplish an action.

Today's Writing Hack is a quick, down and dirty way to come up with great character names that reflect a character's time era and sometimes their career, ethnicity, or socio/economic status. Here's how you do it. Start reading printed material like church bulletins, newsletters, and newspapers. Don't forget the phone book either.

I always read my church bulletin because the news is broken down by age group from Sunday school classes for little ones to senior citizens. New babies, those to be prayed for, and deaths are listed. So if you want to see what people are naming babies right now, make note of those names. Five years from now when you're writing about kindergarteners, you'll know the popular names that would predominate in a class.

Same with an aged character. You wouldn't name an 80 year old woman Brittany, but Betty would be a good choice. If you look at the seniors Sunday school class, you'll see names you don't hear any more like Edna, Nell, or Rose. For men, though the names are more enduring and classic, you won't find Chad or Justin. Instead, you'll see Elmer, Norman, or Ronald.

I hope this doesn't sound morbid, but the best source of names is usually the Obituaries because the name and age are clearly linked. You can also read brief histories of the deceased and see what major life events affected them. The career is also given, and a lot of times, reading this will make you think, "yeah, sounds like a lawyer or doctor or teacher or farmer."

Sometimes this can be a shorthand way of indicating to the reader that this character is a rich arrogant snob. Other times, you can choose a name like that and play against type by making him warm and compassionate but saddled with the weight of a name he doesn't want to live up to.

Just reading news in the paper helps too. Names, ages, and sometimes origin are given. Names for a South Korean man in the news will probably be different from a man born in the U. S. who has Korean grandparents, just as Hispanic names will vary from Cuban to Mexican or Colombian.

To a lesser extent, magazines can be useful though most of the ones with which you're familiar are aimed at a mass, general interest audience. Trade Magazines, published for highly specialized audiences like the AMA Magazine for doctors might be of use, especially if a career field tends to attract the same people from the same geographic area. For instance, a magazine about ice fishing in Alaska might attract residents of that area and most of them might be Inuit so you could find a narrow focus group of names that might indicate ethnicity.

Looking through the Houston phone book, it's easy to find lots of names. Make a list of given names, mix and match them to create a character name. Even small communities in the U. S. will have ethnic flavor to their phone books. Vietnamese settled in large and small towns across the country, as have Muslim, Hispanic, and other Asian groups.
The Rules

Never take a real person's name. Mix and match surnames and given names.

If creating a character of different ethnicity from you, check to make sure you've made the right assumption. Let's say you need a Hispanic surname with Mexican origins, not Puerto Rican, starting with the letter S. Using our new Supreme Court Justice as an example, you won't find Sotomayor in Mexico, but you will find Santos. Just as not all Polish names end in Ski, not all Irish names start with O' so make sure you reach the right conclusion.

Verify your assumptions with research. Search online for fraternal groups based on ethnicity or national origin. In my case, if I wanted to create a character with my ethnic background, then I'd look for groups proud of their Choctaw and Cherokee heritage as well as the Scots, Irish, German, and French groups. Yep, I'm a Heinz 57 variety American like most of my fellow citizens.

Ask your friends, coworkers, etc. if the name you created is true to your character's background.