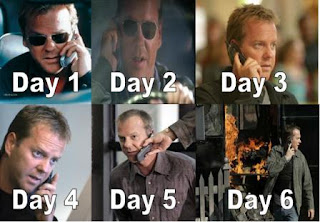 One of my favorite TV programs is 24. Of course, I hated the last two seasons, but it seems to be back on track this year. Jack Bauer is a great character.

What can writers learn about viewpoint and characterization from Jack Bauer? Plenty!

A fictional character, as opposed to a real person, must be larger than life. Jack Bauer as portrayed by Kiefer Sutherland on the popular action thriller 24, is an iconic hero, larger than the great outdoors.

In the Thick of Things

Viewpoint characters are telling the story. They're always at the center of the action. Watch 24. If other characters have done something, you'll see that Jack Bauer doesn't react to the event so much as he acts. His reaction is to take action. He sets events in motion. He doesn't sit around internalizing and stewing emotionally. He takes action immediately to avert disaster or change the expected outcome.

Your viewpoint character, the protagonist, always has everything at risk. That's Jack Bauer's job description. He risks life, limb, happiness, and freedom every hour of a 24 hour period. It doesn't matter what he personally wants or what he may personally lose. He honors his commitment and vow to his country and does his job regardless of the cost.

Your protagonist or hero is struggling to achieve a worthy goal against great odds which is the conflict driving the story. Jack Bauer faces insurmountable odds in his quest to find bombs, hidden saboteurs, and stop the forces who want to destroy his country. Yet, somehow, he always comes out on top. He never stops. He never quits. He keeps going despite anything and everything. He is the epitome of goal-focused consistency.

Your viewpoint character changes from the beginning of the story to the end. He or she is altered and thus able to live in the changed world - changed because of the story events.

Don't think that Jack Bauer - because he is a TV series hero - is unchanged by all he has faced. Each season he's changed in subtle ways. If you watch the previous years of 24 on DVD, the change is dramatic. You see his loss of identity and self as he's gone from being a happily married family man at the opening of Day 1 to a bitter, ostracized loner with only a couple of friends.

In being a character willing to do whatever it took to accomplish the greater good, Bauer has lost the ability to be normal. In a room full of people, he stands out the way a tiger would in a room full of kittens.

Yet, like all good complex characters, being normal, loving and being loved in return is what he wants. That's his internal conflict. What he most wants is what he can't have.

Whether you're creating a hero or just a character, observe real people and the larger than life characters in successful TV and movies.