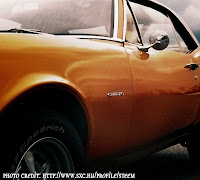 My husband's dream has come true. I'm now interested in cars. I even speak car lingo, easily tossing around words like headers, turbocharge, and supercharge.

I think I mentioned that I'm working on a mystery, hopefully book 1 of what will be a series. I posted an accountability bar in my sidebar, but I haven't updated it. (Life is really too frantic when you can't update your pages written accountability tool.)

Anyway, the genesis of this mystery was my fascination with the muscle car auctions televised on one of my HD channels. I was just blown away at Corvettes that went for 12 grand and old Camaros that went for more than half a million. The more I watched these auctions; the more interested I became in collectible cars. Much to my darling husband's delight I might add. Suddenly, he had a wife who was interested in horsepower, camshafts, and turbocharged engines.

Since I love research - it's a great way to procrastinate - I found a website to educate me,Turbo Charger Pros. I'd previously learned that the engine is one of the most important factors in the value of a collectible car. Horsepower is king. At Turbo Charger Pros, I explored their Learning Center to find out more about this.

What does a turbocharger do? It's all about air induction. Turbocharging uses forced air induction to produce more power overall than the same engine without the charging.

Know the difference between turbocharge and supercharge? It's the power supply. In a supercharger, a belt connects directly to the engine so it gets its power the same way that a water pump does. A turbocharger gets its power from the exhaust stream which runs through a turbine and spins the compressor.

If you don't have the kind of muscle car engine you want, then you can turbocharge or supercharge your engine in order to get the power that makes people - mostly guys - sit up and take notice.

The website I was researching has a turbocharger in stock for cars from Audi to a VW turbocharger. Cool, huh? Of course, there are other valid reasons, than racing, for wanting to turbocharge or supercharge an engine. You might want to do this if you have to tow heavy loads like travel trailers, boats, and such.