Quote of the Week

This is the month for all things scary and fearful. Fear is of itself an interesting topic and something completely subjective for the most part. Millions of people are afraid of spiders, but they don't bother me at all.

Professionals trained to deal with the effects of fear say only fear of the dark and fear of falling are genetically encoded in humans. All the other fears, we personally and individually create. 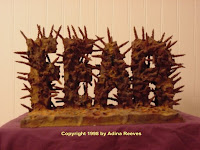 senior in high school and in advanced art. Adina, formerly a commercial artist who now teaches art in high school, selected fear as her focus that year. All art she created interpreted fear in some media. This sculpture won First in State of Texas.

I've often thought this sculpture is particularly illustrative of the destructive power of fear with its cruel, twisted spikes. If you bow to the power of Fear rather than fight it, fear will bore into your soul and eventually destroy you. Writers and other creative souls seem especially prone to fear. Fear of rejection. Fear of failure. Fear of success, whatever you want to call your personal nemesis.

When fear rules, you lose all that you might otherwise gain.