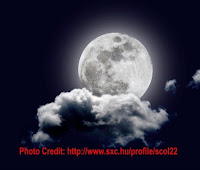 Recently, I bought two beautiful new hardwood lateral files, but the contents of my old beat up metal file cabinets won't fit. So I'm cleaning out files again. I came across an article I'd clipped from some writers' club newsletter. No date. No banner so I don't know to whom to attribute it, but it's so intriguing I had to share. It made me think of my grandfather's comment about the moon landing: It's not real. They just painted it on celluloid. My grandfather, born in 1882, referred to the film used for movies and television as celluloid. Maybe he was right.

If you know who originally wrote and/or published this, contact me and I'll publish the information.

So you think we or the Russians actually went to the moon? The people at Meteor Crater, Arizona, say probably not.

You see in 1969 they saw NASA make a movie in that same crater of a simulated moon landing starring none other than Neil "the first man on the moon" Armstrong himself. A 60-year-old man described to me how they brought the moon landing craft out on a tractor trailer, offloaded it, and ran it around the crater that was created by a meteor crash when his father was a little boy. They even bagged so-called moon rocks and took them away, according to him.

They were really surprised to see a similar event portrayed on TV, on July 20, 1969, the same year. Did the U.S. government allow a hoax to take place because they wanted to plant the US flag on the moon first? We probably will never know, but there are a lot of people who believe it was only make-believe.