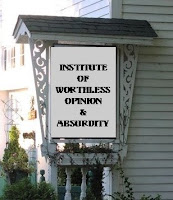 Here at the Institute, I'm cleaning out files. I found something I'd clipped from a newspaper about 20 years ago. At that time, nine of the our leading historians were asked to name the most significant events in the world since the start of the second millennium, A.D. 1001.

Here are their answers in chronological order:

Rise of Western Europe to world dominance, militarily and economically, starting early in the millennium.

The Mongol invasions of the 13th and 14th centuries, which unified Eurasia.

The plague of the 14th century, which killed at least one fourth of the population of Europe and China

Columbus's discovery of America in 1492, which linked the hemispheres and opened up the seas.

The Enlightenment of the late 18th century, a philosophical movement that had a profound impact on intellectual progress

The building of railroads throughout the world in the 19th century.

The industrial revolution of the late 1800s, and the continuing developments in science and technology.

The detonation of the atomic bomb in 1945

Current serious problems such as world hunger, environmental pollution, and the specter of nuclear war.

I decided to see what, in this new millennium, is considered significant events in our history. I plugged that phrase into the Google search engine and was rather dismayed at the results. In today's world, these are listed as significant events:

April 30, 1975, the day South Vietnam fell to northern forces, signaling the end of the Vietnam War

January 28, 1986, the day when the space shuttle Challenger exploded after liftoff from Cape Canaveral, killing all seven crew members.

Of four events listed as significant, two of them are actually about the entertainment pop culture. As head of the Institute of Worthless Opinion and Absurdity, I'll not offer my take on this. I'll let you draw your own conclusion.
Posted by Joan Reeves at 10/02/2008 06:00:00 AM