I'm training my Dragon so haven't had much time to blog. I haven't yet decided whether I like my dragon, meaning of course, not the scaly mythical creature, but Voice Recognition Software, Dragon Naturally Speaking. Takes a lot of work, and I hate having to spend so much time away from other projects, but my tennis elbow is getting worse. 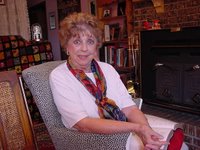 Hi, everyone! I thank all who emailed me with concern about my absence from blog-world. I'm more rested up but think my brain is still silly putty so I'll ease back into blogging with:

How I Spent My Summer Vacation (Are you getting a flashback to those inane themes some teacher always required us to write?) See picture of Mom on the right.

I spent a lot of this summer at my mom's. My mother, a lady of a certain age who would brain me if I actually told you her age, decided this year that she wanted to move close to my older brother. She had lived in the same house in a small town in Louisiana, only 20 miles from my older brother, for 43 years, but she thought the time had come when she needed to be very near someone who cared if she didn't answer the telephone or take in the mail. I think you get the picture.

My brothers and I respected her decision even though it fell to us to get her house ready to sell. This translated into a lot of time spent painting, repairing, and generally clearing out the clutter accumulated during four decades. No small task because our mother is a woman who likes to collect.

This also meant trying to get Mom to part with things that WE didn't really want to pack, move, and unpack--like boxes of music, we're talking 78s, 33 1/3, 45s as well as 8 tracks. Boxes of books. File cabinets full of genealogy clippings, information. On and on the accumulation sprawled.

We failed miserably. My mom is one determined lady. She wanted ALL her stuff in her new home. Even though she no longer has the equipment to play vinyl of any type - we won't even discuss 8 tracks - she wanted all the records. All the books. Everything.

The house sold immediately. She decided to purchase a manusfactured home, more commonly known as a mobile home. Or in her parlance, a trailer. Though the one she bought has the same amenities as my "stick-built" custom home. What an experience! I know more than I ever wanted to know about putting in the utilities for a new home. Suffice it to say that setting up a mobile home is like building a house from the ground up in less than a week. The easy part is getting the home to the site even though "mobile" is almost a misnomer given the size of the manufactured homes of today.

Once the home was delivered, putting in the utilities is next which requires permits, time, money, and professionals. I won't go into details, but let me tell you, if you want to know what is entailed, just ask me. I can tell you all about Modad septic systems; power poles, meter loops, and the cost of 4 runs of copper wire; water wells and pumps; and telephone line problems in the country which means the pedestal for the underground cable often gets bush-hogged over. You see my mother moved near my brother who lives on a farm so things like this are a concern.

With the home on site, we started moving. And we moved, and moved, and moved. I thought we'd never finish moving. Of course, the mother-daughter conflict erupted over some of the things she wanted to move. The records I just rolled my eyes and stacked the cardboard boxes in the new guest room closet. But the books - heavy books - is where my back and my tennis elbow left arm drew the line.

If my husband ever wondered where I acquired the book habit, he can just look at my mom. Now, I love books, but after moving many times in the last few years, I've been forced to question the wisdom of carting around a few thousand books simply because I paid good money for them or they were given to me or I've had them since childhood, etc. However, I could not get her to see reason, based upon my increasing physical frailties - LOL!

One Sunday afternoon, we spent a hilarious time going through her books. Dusting each one before putting it in the new shelf in the new house. Well, it didn't start out hilarious. It started with her adamantly stating she didn't want to get rid of any of them. So I began to question each book. Had she read it? Yes. Did she plan to reread it? No/maybe. Did she like the book? Astoudingly, in some cases, she said no. But she still wanted to keep them.

That's when I realized logic played no part in her reasoning. Feeling comfortable because she would be surrounded by all her possessions was the underlying reason for her refusal to get rid of anything.

Once I understood this, I gave up. I admit I started to chuckle which was preferable to screaming in frustration. But she and I got through it without killing each other. When I go back to connect her computer to her new internet service, I'll also be installing two more bookshelves into her study. Hey, I know when to throw in the towel.

So today I have to tell all of you how much I admire my mother for making a difficult decision and following through. It's not too many people who are willing to change their lives completely at any age, but for her to do it, at her, ahem, current chronological position, is pretty darn terrific.

...but I'm hiding and sleeping. Exhausted doesn't begin to cover it. More later on how I spent my summer.

Just a quick note to say I have to take an emergency trip. Back in a week. Sorry, readers.

Normally when I finish a manuscript, a feeling of euphoria lifts me out of my exhaustion. This time, I'm so tired, not even that can energize me.

I've been trying to get revisions finished and get the story in the mail, but everything in the world has happened the last few weeks. I did get the revisions done by my self-imposed deadline date, but I literally could not find the time to proofread the final manuscript.

I've been trying to go through it in odd minutes here and there so I made myself stay up until two this morning to complete the job.

So I got it in the mail but I'm beat. Just awoke from an afternoon nap to see if my patient DH needs anything. I never sleep in the day so this was completely out of character for me. But it sure felt good.

My DH had a little surgery this week (is that an oxymoron?), and I'm playing nursemaid while I try to get my manuscript printed, packaged, and mailed.

What does this mean? Probably no blogging for a bit. Like they said on Eureka: "Time and space are relative, and they both are money." What does that mean? Sounds profound so tack on your own interpretation.